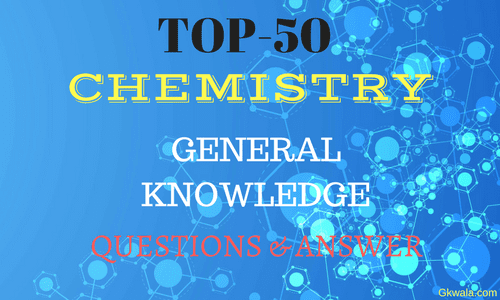 Q1.The fat of a common mussel-secretes a sticky glue that can be used to make heart implants.The unique chemical compound present in the glue is
Ans-Dihydroxy phenylalanine

Q2.When a metal is heated in a flame, the electrons absorb energy and jump to higher energy state.On coming back to the lower energy state, they emit light, which we can observe in
Ans-Emission spectra

Q3.Exposure to mixtures of chemicals is greater than expected on the basis of effects of exposure to each chemical individually.This is known as
Ans-Synergism

Q4.The effector response produced by two or more chemicals are less than the sum of the effects or response that the chemical would produce individually is known as
Ans-Antagonism

Q5.The open ‘Sigrees’ or coal stoves often require fanning to sustain burning because of
Ans-Tendency of carbon dioxide to form a layer along with dust smoke

Q6.Browning of paper in old books is caused by
Ans-oxidation of cellulose

Q7.The process of improving the quality of rubber by heating it with sulfur is called
Ans-Vulcanization

Q8.The gas that causes suffocation and death when coal or coke is burnt in a closed room is
Ans-Carbon monoxide

Q9.Atoms having the same number of protons but different number of neutrons are called
Ans-Isotopes

Q10.An electrochemical cell which is used as a source of direct electrical current at constant voltage under standard conditions is called a
Ans-Battery